How #publictransit is falsely framed as dangerous, unpleasant 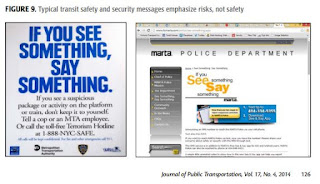 Despite its relative safety, many people consider public transit dangerous and are reluctant to use it or support its expansion in their community (Ferrell, Mathur, and Mendoza 2008; Kennedy 2008). Several factors may contribute to this exaggerated fear. Transit travel requires passengers to be confined with strangers in sometimes crowded and uncomfortable vehicles and stations. Although most passengers are responsible, considerate, and clean, a (usually small) portion is anti-social, rude, and dirty. This can cause feelings of powerlessness, discomfort, and insecurity.

In addition, transit organizations can unintentionally increase fear with safety and security messages that emphasize dangers, including dramatic but unlikely threats such as terrorism, without counterbalancing messages about transit’s overall safety, such as those illustrated in Figure 9.
at 10:46 PM

Email ThisBlogThis!Share to TwitterShare to FacebookShare to Pinterest
Labels: #trash